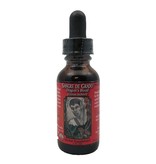 Sangre de Grado is a tree that grows in the Amazon region of South America. The tree bark and sap are used to make herbal preparations used for millennia in the Amazonian cultures. Often referred to as the Liquid Bandage, it is most commonly used to increase healing time on wounds. Put it on a cut, bite or open skin and once it drys it seals and protects the skin underneath, often increasing healing time. It's known for its anti-bacterial, anti-fungal, and anti-viral affects.